Things change quickly in the world of software development. I started my career writing in Fortran 77. I stayed fairly abreast of languages until C++ and Java. I wandered by the Pragmatic Bookshelf to see what’s new. Languages/Frameworks I’ve barely heard of include: Erlang, ANTLR, Stripes, Cocoa, Scala, Groovy and Clojure. I see that Learn to Program uses Ruby. Maybe I should start there.

And in the beginning

“The learning of a thousand languages begins with a single keystroke.” (with apologies to the original author) 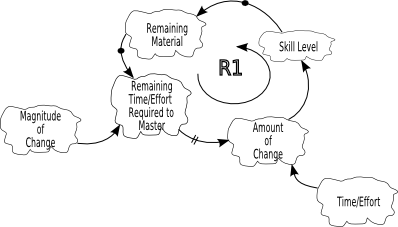 Using this picture we can look for intervention points. What can we do, add, subtract that will get me to “proficient” if not “expert” in the shortest time possible? After all, in business “time is money.”

Smaller changes should require less time. Going from Assembler to C# requires serious neural re-wiring. Java to C# not so much. Yes, there are differences between C# and Java, but it’s a smaller jump than from Assembler. Smaller changes generally don’t result in large paybacks.

Increasing the amount of time/effort will shorten the time from beginning to “proficient” as the “amount of change” will accumulate faster.

We can add training to the change effort. The training ranges from providing books/reference materials to the Brown Bag pattern to sending people to classes.

Another option would be adding a coach. XP coaches work with team members in developing skills beyond the basic language. Skills such as TDD, refactoring, maximizing the amount of code not written.

We now have a system that looks like this: 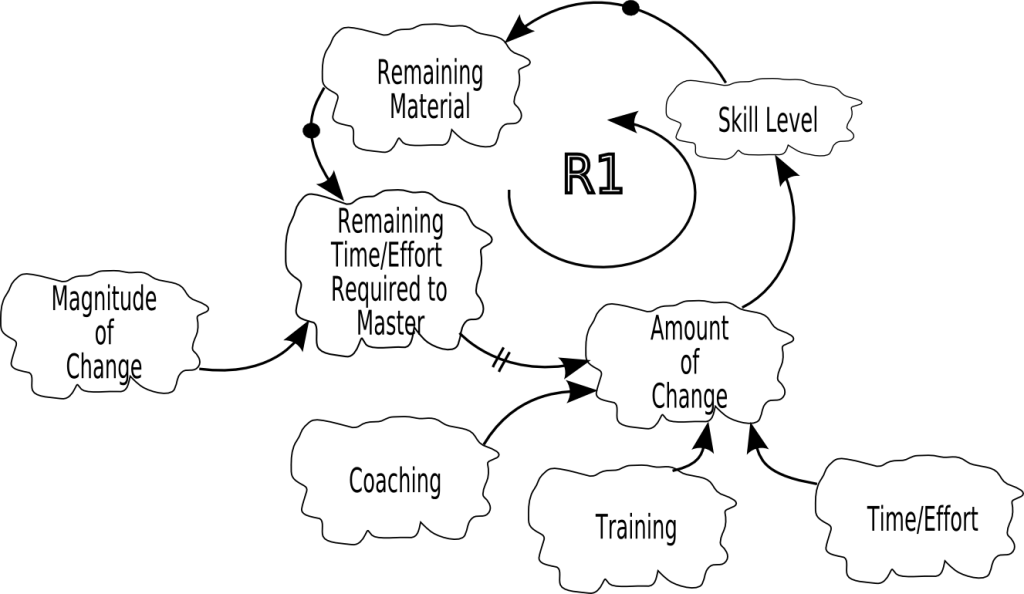 What Should You Do?

When planning a change embrace the fact that developing useful skill level takes time. If the change involves more than a single person, then everyone will progress at a different pace.

Well spent money can aid when implementing changes. Distribute books to team members. One organization I worked with offered each developer copies of Testing Extreme Programming and Agile Principles, Patterns, and Practices in C#. Send people to training and conferences.

If you’re dealing with process changes hire one or more coaches to assist the developers with the transition.

“It isn’t the changes that do you in, it’s the transitions. They aren’t the same thing. Change is situational: the move to a new site … Transition, on the other hand, is psychological; it is a three-phase process that people go through as they internalize and come to terms with the details of the new situation that the change brings about.” William Bridges.