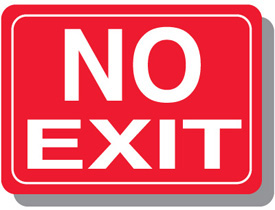 Always have an exit strategy.

“The thought that disaster is impossible often leads to an unthinkable disaster.” – The Titanic Effect, The Secrets of Consulting, pg 95

Engelbert, the Software Engineering VP, sat quietly in his office pondering the current state of UberDenke’s next UDCRM release. Slowly he had realized the release wasn’t going to ship on time. There were many more errors than he planned for, and over half of the code had not even reached the testing group.

Or was there? Engelbert’s thinking and actions have trapped him in a reinforcing feedback loop. His feelings are creating an emotional downward spiral that will continue until some system limit is encountered. The system limit may be the when he finally admits to others the release won’t ship on time. Perhaps his health (mental or physical) may break first. Or maybe he’ll change jobs.

We can all sympathize with Engelbert’s plight, because at some time or another, we’ve all been caught like this–a trap artistically summarized by Jean Paul Sartre’s depressing play about three people trapped in Hell, No Exit.

Engelbert set up his own No Exit hell right from the beginning, because he, like Sartre’s victims, had no exit strategy. An exit strategy is a planned set of activities to initiate when one party suspects that a relationship isn’t working, activities that should prevent the situation from becoming a hellish trap.

The no-exit dynamic generally begins when two (or more) parties agree to work jointly on some project. Sometimes the agreement is not explicit, as often happens when the work of one party depends on another party’s output. This joint work could stem from a voluntary relationship (such as co-authoring articles) or perhaps from a management mandated decision. In Engelbert’s case, his manager told him to use a new process to build the next generation of their software product.

The parties start merrily to work under the agreement, and all goes well for a while. Next, life happens.

Perhaps the person with whom you agreed to write an article falls ill, changes jobs, or takes time away from the joint project to deal with pressing family problems.

Perhaps the other team at work discovers the problem is more difficult to solve than anticipated. Possibly another higher priority project siphons manpower from their team.

Or perhaps the dynamic starts up when the levels of commitment and interest are unbalanced, or when there is a different understanding of the agreement.

The first slip or two may not create a problem. We use explanations like these:

Whatever the reason–and there are hundreds of variations–the slips soon become the norm, not the exception. Since the slips happen individually, separated by days or weeks, the cumulative effect isn’t noticed until it’s too late to do anything reasonable about the slips. The more we become accustomed to the slips, the more tolerant we become as new slips occur. It’s not that Engelbert is stupid. It’s just that he lacked foresight, or was too optimistic. If he had known when starting development that the project would slip several times, he could have planned differently.

Failing to take early action sets the precedent for continuing failure to act. Failing to act causes negative feelings to accumulate. The negative feelings are there from the first slip, but they are ignored or suppressed until the accumulated value becomes greater than we can tolerate. When we finally surface the negative feelings, we feel trapped by our previous actions. We’ve become locked in the reinforcing feedback loop of simultaneously wanting out and feeling trapped.

In this dynamic the system continues accumulating more negative feelings until the system experiences a catastrophic collapse. Engelbert may be fired, or quit, or get sick, or ship a system that drives his company out of business.

Setting up the Exit

So, what’s the solution? The first step to exiting the reinforcing feedback loop is to become congruent by balancing the factors of yourself, the other party or parties, and the context in which the dynamic is taking place. Most commonly, in this type of a feedback loop, the other becomes lost. As you try to cope with the situation, you start blaming the other person for the problem, and that only tightens the loop. Responding incongruently like this creates stress and does nothing to improve the situation or help find an exit from the loop.

Becoming congruent allows you to be centered in your actions. Being centered opens a range of responses you can use to change your view, each of which might break the trap. By changing your view of the situation, we can see possible interventions that will change the loop dynamics. Among such interventions are these:

No self-reinforcing loop can last forever. Sooner or later, one way or the other, the loop will exit. If no action is taken, the reinforcing loop will continue its downward spiral until some other part of the system collapses:

Another exit option is to become centered, congruent and work on changing the loop dynamics. The key here is to recognize the No Exit dynamic early, and take corrective action quickly. Your plans and strategies must be flexible. While the goal can be constant (exiting the loop), life continually changes, so fixed plans inevitably become obsolete or, even worse, counter-productive.

When the loop finally exits, there are several possible outcomes:

This applies to multiple party systems (two or more). In addition to software development this could include:

In a crisis, it’s much easier to stop and think if you have provided time in your plan for stopping to think. If you haven’t, one party will say, “Here you tell me that we’re behind schedule, but you’re adding this thinking-bit to the schedule. That doesn’t make sense.” With that easy dismissal, everyone quickly hurries back to their unproductive panic.

Examples of advance preparation of exit strategies include:

A well-designed system will set some limits at the beginning, limits that are not vulnerable to a buildup of tolerance.

Most parents have learned some dos and don’ts about what to do when they witness such a no-exit loop. If you find yourself on the outside looking in, you might apply one of these principles:

In deciding about intervening, choose which of three Exit Levels you’re seeking:

Of course, the best exit is the one you have planned for before you ever get started. Unfortunately, there’s a prevalent romantic notion that real relationships shouldn’t need a pre-nuptial agreement. As Engelbert’s boss argues when he tries to set up some exit strategies before his next project, “Thinking of possible failure is negative thinking. It’s just that kind of thinking that guarantees we’re going to fail. Just like you did that last time.”

Of course, the last time, they had no such exit strategy, so their failure was much more costly and painful than it need have been. That’s The Titanic Effect: The thought that disaster is impossible often leads to an unthinkable disaster–“Why would we need lifeboats on an unsinkable ship?”