But that’s not what I usually experience in my work. Why does this gap exist?

A Handful of Change Models1

My recent posts have centered around the Satir Change Model. This describes how people respond to change. But how do we change organizations?

Other models exist, but often they fall into one of the above categories.

A Little More About Organizations

According to the Merriam-Webster dictionary “an administrative and functional structure (as a business or a political party)” describes what I mean when I say “organization”.

This means we change an organization by re-arranging its structure. We add a new department (Quality Control), insert a new role (Director of Quality), reassign people, update the HR manuals, and re-draw the development process. Implement the new structure and we’re done! Sort of. If the change doesn’t seem to work fast enough, we can increase the pressure or put motivational posters on the wall.

But What About the People?

While organizations can change at the drop of a new org chart, people can’t. We miss the old familiar way, aren’t really sure what’s going on, and where this might all finish. In Managing Transitions, Making the Most of Change William Bridges identifies these three zones as the Ending, the Neutral Zone, and the New Beginning.
It looks like this: 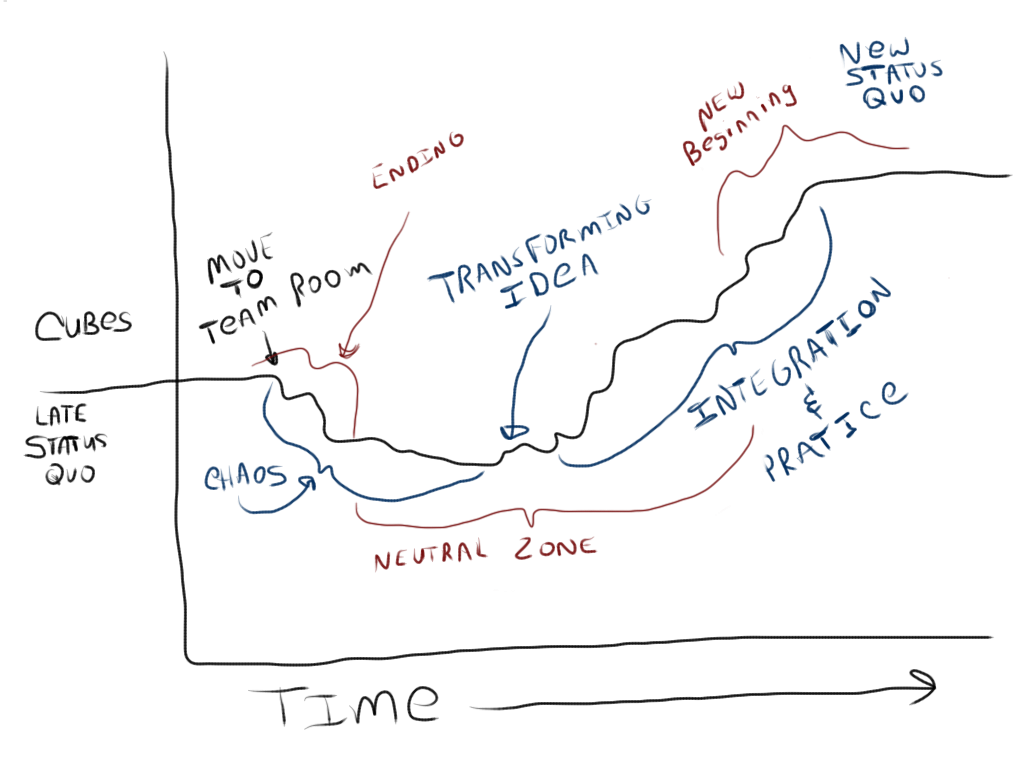 Using our previous example of moving a cross functional development team into a team room:

Moving to the team room represents the change. Make the announcement and move. I’ve seen teams pick up their computers, manuals and move. I’ve worked where “facilities” moved the equipment and books over the weekend. Either move has a discrete start and end. The change announcement starts the transition process.

When team members hear they’re moving to a team room, they wonder: “What will it be like?”, “How will this affect my ability to concentrate?”, “If I play along, how long will it take before we move back into cubes?”

After the equipment arrives and they’re sitting in the team room, they start to adapt to their new surroundings. They may establish times when the team tries to stay quiet. Two or three may go to the whiteboard and have a conversation about a piece of code. They develop simple rules for handling interruptions.

Eventually the team room becomes the norm. Team members become comfortable with the change to the team room. I’ve seen those most opposed to moving become ardent supporters for the change.

Not everyone in the organization completes the transition started by the change.

Those who do make the transition from ending to new beginning do so at different rates.

“You need all three phases, and in that order for a transition to work. The phases don’t happen separately; they often go on at the same time. Perhaps it would be more accurate to think of them as threeÂ processes and to say that the transition cannot be completed until all three of taken place.”2

You can help people understand and transition quicker. Bring in a change artist like me who has domain experience and has helped other organizations and their employees through the change/transition process.

1You can read more about these models in Quality Software Management Vol 4 Anticipating Change, © 1997 Gerald M. Weinberg, ISBN 0-932633-32-3 pp 3-14 If you prefer ebooks Becoming a Change Artist contains this material and more