Most of the time, most of the people don’t put a lot of thought into their behavior. They run an “auto-pilot” program that governs how they respond. If we examine the elements that generate behavior, we get something like this list:

If we stopped and consciously processed each step all the time, civilization would screech to a halt. How can we create a safe environment and still create value for our clients?

Beliefs and Values – The Invisible Elephant

We don’t walk around the office starting conversations with “Well, I believe that …” or “Given my values …”, yet our beliefs and values form the seed for our behavior. 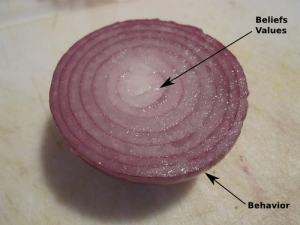 We get some of our values and beliefs from our environment. The culture and family we’re part of greatly influence us. Strong hierarchical relationships make sense in some cultures but seem stifling and ill-informed in cultures that value independence. Another source involves our experience. Behavior that resulted in positive outcomes get reinforced and converted into beliefs about how we should behave. Having been part of a lot a decisions I have a belief that including everyone’s ideas about the decision helps create a better decision.

With a list of values and beliefs we can know what is important to our team, but this list doesn’t tell us how to behave.

Moving one step closer to safety brings us to team norms. Team norms tell us what behavior we expect from the group. Team norms for getting everyone’s ideas might include:

With this list team members can compare behavior with how the team expects its members to behave.

I’ve seen these lists referred to working agreements, norms, ground rules. As guard rails they serve to keep behavior in some range and allow team members to point out when a member is not staying within the range of acceptable behavior.

Like team norms, we create simple rules based on the team’s beliefs and values. Simple rules provide guidance for decisions and action when situations are less than predictable. Simple rules can generalize to fit most situations eliminating the need for an exhaustive list of acceptable / unacceptable behavior.
A simple rule for the getting everyone’s ideas might be:

Some guidelines for simple rules include:

Creating simple rules allows team members to act accordingly and know the team will support them.

What techniques/models do you use for creating team behavior? Leave a comment …