I recently had the opportunity to observe problem solving at its more pure state. We took our grand-daughters, Jessica (4), and Nikki (2) to the park. For a period of time, they played on a “jungle gym” that looks like 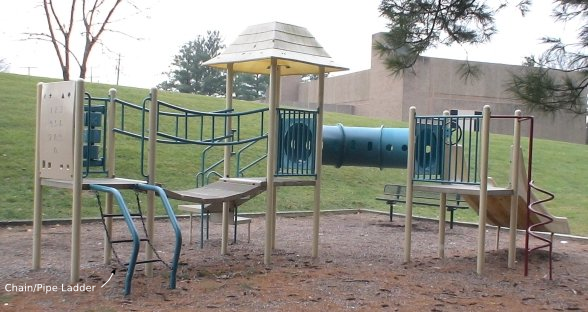 Being older gave Jessica advantages, but that didn’t stop Nikki.

If You Don’t Know Where You’re Going, Any Road Will Get You There

Nikki saw Jessica climb the “chain/pipe” ladder and decided to follow her sister. She trundled around the jungle gym to the foot of the “chain/pipe” ladder. I’m absolutely she didn’t stop and say: “A problem is the difference between what I have, and what I want. I’m at the bottom, and I want to be at the top. Therefore I have a problem. I need to hire a consultant. I wonder what Pop charges?” It went more like, “I want to be up there.”

Straightforward differences can usually be solved with straightforward action. But “differences with two or more possible solutions of unequal value to the problem solver” (Ackoff’s definition of a problem) will require more explicit statements of where you’re starting and where you’re going. The more detailed the information you collect, the better you’ll understand the the difference.

What Do You Want to Keep?

Nikki is incredibly observant and tactile. She noticed and picked up a small branch with long pine needles just before she decided to climb the “chain/pipe” ladder. This complicated her task since it only left one free hand for grabbing and stablizing.

As we solve problems, what do we try to keep? Parts of the current system are valuable and worthwhile, and we might want to keep them. But keeping something from the current reality affects our possible solutions by limiting the degrees of freedom available to us.

Be Willing to Change

When Nikki started up the ladder, she had her right hand on the rail. She made the first step, and realized she wasn’t going to be able to hold on the rail with one hand, the pine needles with the other hand, and NOT fall as she made the move to the next rung. She stopped, thought, and moved her right hand to the rung two above the current rung. This allowed her to climb the ladder.

Part of problem solving involves analyzing feedback, asking ourselves, “Is this working?” or even “Does this make sense?” I worked with a client once and had a simple solution to the task. The bad news was it would require 8 repetitions. As I was manually editing the first file, the client was attempting to use Excel macros for string manipulations. When we compared notes, I noticed his solution made more sense than mine, he was simply using the wrong scripting language. I changed what I was doing, wrote a straightforward script that did the substitutions we needed automatically. It made more sense.

It rained the night before our trip to the park. Nikki decided to go down the slide, and over Karol’s objections, I let her. I mean, what’s so awful about a wet bottom? During the kilometer walk back to my daughter’s house, Nikki’s legs gave out, and guess who got to carry her home!

When we choose a course of action, we “un-chose” other courses. To help think about what could go wrong use the following rule of three. “If you can’t think of three things that might go wrong with your plans, then there’s something wrong with your thinking.” [Secrets of Consulting, Jerry Weinberg pg 81] If I’d have thought about the trip home, I could have guessed what was going to happen. When you find bumps on the project path, take a moment, reflect and ask, “Could I have foreseen this would happen?”

You can see an awful lot, just by looking – Yogi Berra

Seen anything interesting lately? Drop me a note.