Causal Loop Diagrams (CLDs) can help us understand complex interactions and events by revealing system structure. Unlike buildings, most systems don’t have visible structure. We notice systems by observing events. When the events form a pattern (usually over time), there’s indication that a system is working. We use CLDs to diagram the system and reveal the interactions that lead to events. In “Learning to Change”, I used Casual Loop Diagrams (CLD) to show interrelationships involved in my learning process.

Using all the parts, we can build a simple diagram. 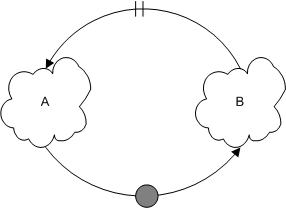 You can start reading a CLD on any node. I once sent a CLD to a friend who responded, “Don, I don’t understand what you’re trying to show.” I promptly started telling the story (via email), but noticed that I had to start at a specific node, and by the time I was 1/3 through the diagram, my explanation fell apart. I redrew the CLD, and got my point across.

We read the above figure as follows:

This forms a balancing loop. The system may oscillate, but will stay within limits. Balancing loops provide stability in systems.

Suppose the influence between “A” and “B” wasn’t inverse. As “A” goes, so goes “B”. The above figure would then read:

Or the in the opposite direction:

The example we’ve been using a simple diagram. These same basic diagramming parts can build complex diagrams. At the AYE 2004 Conference, attendees in Session 11 created a CLD for credit cards. For those wondering, Causal Loop Diagram and Diagram of Effects are the same drawing type. A CLD for credit cards could resemble

Balance seems to be in the middle of the drawing, so let’s “read” that part of the diagram.

Take a minute to “read” the rest of the drawing. No wonder Albert Einstein said Compounding interest in the greatest mathematical discovery of all time.”

Some things to remember:

Different notations exist for CLDs. Some notations use “+” and “-” at the line’s arrow end to show “same” or “inverse” links. Occasionally you’ll see a “B” or a “see-saw” in the middle of a loop indicating the loop balances. A “snowball” or “R” indicates a reinforcing loop. The variables may not be in an ellipse. These minor variations don’t change how the CLD gets read. No “UML” exists for CLDs.

Jerry Weinberg developed additional CLD notations to help understand software project management and development. These components add some richness (by showing the human part) and are:

In Jerry’s notation, these have the following meaning:

Causal Loop Diagrams provide a to describe what happens in the real world. While notations differ slightly, the basics don’t change. Understanding how to read one notation enables us to understand other notations.