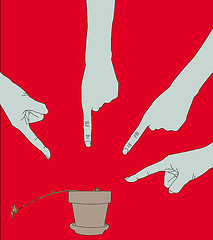 Engelbert watched Pam nervously chew on her knuckle as she stood in the door of his office, answering his call. “Come in and close the door.”

He motioned her to a seat, then stood and pointed an accusing finger down at her. “We need to decide how you’re going to explain what happened with the UDCRM release”, he said. “You’ve managed to upset everyone. Sharkey told the CEO the customers are screaming because we can’t ship on time. This makes the entire development staff look bad.” He paused for emphasis. “It makes me look bad.”

Pam started to respond, but Engelbert shushed her with an open-palm gesture. “I don’t need excuses from you. Or apologies. What I need is a memo accepting full responsibility for missing the schedule.” He reached for a sheet of paper on his desk, then held it out to her. “I’ve drafted something appropriate to make it easier for you. All you have to do is sign it.”

Pam’s eyes fell to the floor, avoiding the paper. She knew she wasn’t responsible. If anyone was responsible, it was Engelbert. She tried to think of a way to refuse, but Engelbert interrupted her thoughts, thrusting the paper close to her face.

“Pam, don’t even think NOT signing this memo. If you refuse to sign, I’ll have no choice but to let you go.”

Pam struggled to keep from crying. Engelbert sat down next to her and put an avuncular hand on her back. “Don’t make me do this,” he said, his voice turning soft and empathetic. “Have you looked at the job market lately? This isn’t the boom time it used to be. There hasn’t been a decent job in the paper in months for someone with your background.”

He took a handkerchief from his pocket and dabbed at her tears. “I’ll do my best for you in the meeting,” he said gently, putting away his handkerchief and handing her his pen. “After a little time this will all blow over. They’ll probably forget about how poorly you did, and you can try again.”

It seems that the Software Engineering VP,Engelbert, has a problem. The problem started in the Liar’s Contest when he agreed to play, and thereby lost. By not planning for a disaster (No Exit) he ensured one would happen. This lead to Pam becoming the Identified Patient. The project didn’t succeed, and all Pam has to do is the sign the document accepting the responsibility (blame) for missing the schedule.

In her distraught state,Engelbert suspected that Pam wouldn’t think clearly. He helped make the experience easier by having her confession already typed and ready to sign. When Pam balked at signing he extorted her. Extortion occurs when a person obtains money, behavior, or other goods and/or services from another by wrongfully threatening or inflicting harm to this person, their reputation, or property.

We can see in the following diagram that Engelbert had at least three options available to him. He could: 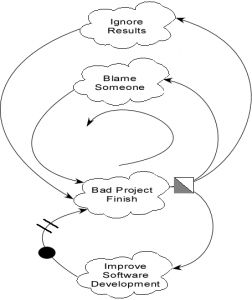 Choices for a poorly ending project.

Of the three choices, only the bottom loop, Improve Software Development, reduces the likelihood that the next project won’t fail. Improving software development will involve training for such things as the development method (changing from waterfall to iterative) or support (version control systems, development tools) and time, making it the least likely choice in this environment. Ignoring the failure (or declaring the results a “success”) leaves the existing system structure in place, and pretty well assures the next project will unfold like this one. Choosing to blame someone for the failure creates new and different problems.

Blaming attempts puts the responsibility for the problem “on someone else”. If successful, the blamer becomes exonerated and the “blamee” now has to deal with being the cause of the problem. In hierarchical systems, blame (like many other activities) starts at the top, and flows down from there. Englebert may be getting heat from Sharkey and the sales organization about missing the delivery date. Englebert may be a skilled player, and is setting Pam up for the fall, being able to report, “I’ve already taken care of the problem.” Unfortunately the problem Englebert solved, him being blamed, doesn’t help solve the real problem, how to be more effective at software development and not have bad project results. 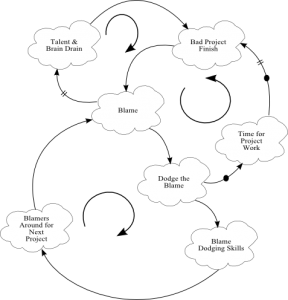 So blame creates problems beyond the original problem. It creates negative emotions, a talent vacuum, and a downward spiral. Talented people won’t work in a blaming organization. The amount they have to pay new employees goes up. This reduces the bottom line, which puts pressure to develop faster, but without improved skills failure actually happens faster, which increases the blame, and around the blame dynamic goes once more.

Note that all three loops in the Blaming in Action diagram are reinforcing (or positive feedback) loops. This says that once these loops start working, they will continue to grow stronger until something, somewhere else in the system collapses.

The best way to deal with such a situation is to not get involved in the first place. But in the excitement of a new project, and new responsibility, it’s understandable Pam didn’t see the warning signs.

The next best advice involves noticing the signs of a failing project. You can learn a lot about a project status by checking for congruence.

No one can come out and actually say the project looks like it’s failing. That would set them up to be blamed.

Blaming cultures reveal themselves in a variety of ways. Attitudes such as “failure’s not an option”, or “if you can’t do it, we’ll find someone who can” give one such indication. Another tipoff is hearing phrases like “It’s not my fault.” “She/he did it”, “You didn’t tell me”, and “I didn’t make that decision” (or their inverses). When you see an exodus of employees, it’s probably a sign the blame loop is functioning at full force.

Blaming doesn’t start at the bottom of the company. Programmers don’t hunt for someone to blame when the a project is late. They scurry for cover. Blaming starts higher in the organization. In this case, the blame occurred at the VP level, between Sharkey and Engelbert. Blame can be thrown around like a hot potato, everyone looking for someone else to throw to.

Engelbert wasn’t able to pass the blame at his organizational level, so he passed the blame one level lower by setting Pam up to receive the blame, and extorting her. If Pam chooses to play the game, she in turn could look for a team lead to blame for the late delivery. And then the team lead could hunt for someone on his team to blame.

What’s A Girl To Do?

At this time, Pam certainly feels like a “deer in headlights.” If she doesn’t get some space to breathe, and time to think, she’ll most likely sign the paper. Pam needs to do something to break the setting. A deep relaxing breath. Shifting her position in the chair. Standing and moving. Getting some space would provide time to think and distance from the problem (as in being blamed). Get a headache. Go to the bathroom. Anything to create space and gain some time.

One thing she could do is threaten, “If you fire me, I’ll tell the whole story when I’m on my way out.” This is blackmail countering extortion. Playing this card requires being ready for “on the way out”.

Confronting Engelbert in his office probably won’t work. Counter-blaming Engelbert won’t work. He has more experience playing the game and can control the flow information to higher in the organization. He’s hoping Pam will placate and sign. Blaming and placating are two of the coping stances available to Pam.

By adding the context to the discussion, other stances become available. Pam can do this by asking “What have you seen or heard that makes you think that I’m responsible for this failed project?” This opens the possibility for a congruent conversation recognizing and balancing, self, other, and context. Pam can then act congruently. While Pam can’t make Engelbert be congruent, she can demonstrate congruent behavior and work towards the best possible outcome.