Esther Derby recently ranted about Force Ranking. I’m not an expert on force ranking, or maybe as an independent consultant I am. I’m force ranked every time I work with a client.

But as I think about what I understand involving force ranking, the logic behind it makes some sense. If I remove the lower performers (by some criteria) from my team, the overall average team performance (of that criteria) goes up. [Let me know if you’d like to see the math behind this thought.] 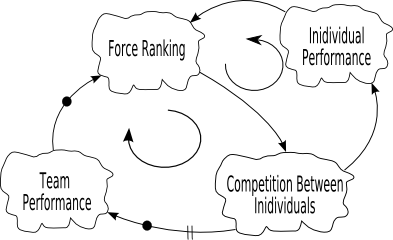 But after a while, the secondary loop starts to apply pressure to the system. The competition between individuals reduces the team’s performance. This happens since time and energy spent “improving one’s self” comes at the expense of time and energy working toward the team’s goals. It probably creates conflict and tension between the team members, and quite possibly internally in the team members (not everyone enjoys competition). Since the overall team performance has gone down, we need to do more force ranking to get the performance up to where it used to be, there by invoking _Weinberg’s First Law of Bad Management_ If what you’re doing isn’t working, doing more of it won’t help.

But It Appears to Work!

For a while anyway. This happens because people will sacrifice for some period of time. This creates the delay before the secondary “team loop” starts to function. During this initial period of “working” observers notice the shiny new management technique and proceed to implement it. However …

Although it is possible to persuade purposeful members of a purposeful social system to engage in a sacrifice for a limited period of time, it is highly improbably that they will accept this condition as a way of life. – Gharajedaghi, Systems Thinking, Managing Chaos and Complexity, pg 67

Why does it fail?

It’s that old-timey synergy thing: “The whole is greater than the sum of the parts.”

Cause-effect comes into play by separating the effect (poor team performance) from the cause (force ranking) in time. When management notices that team productivity has declined, force ranking will be institutionalized, and the primary thought will be “find the low performers and move them out.” It will take a catastrophic calamity before anyone will stop to consider that force ranking may have caused the problem.

Force ranking optimizes the organization at the individual level. As each individual optimizes their outcome, the larger systems (teams, departments, and organization) will be sub-optimized due to the conflicting goals between individuals. If the original reason to force rank is to improve performance, then in the long run, force ranking is dysfunctional as it returns less value to the client than the original state.

Another way to blame?

Without actually saying it, force ranking seems to be a blaming activity. People are identified as “not as good” and removed from the team. Here’s a DoE that shows blaming’s effects. 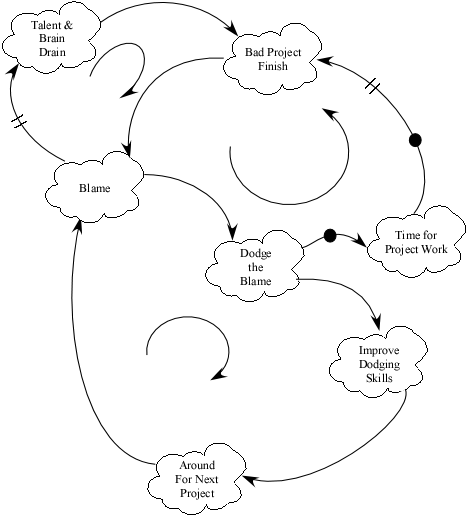 What did I miss? Send me an email.